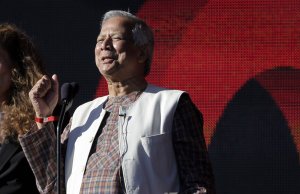 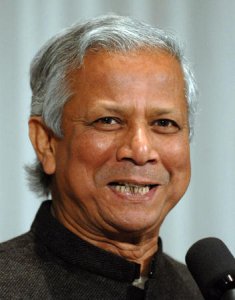 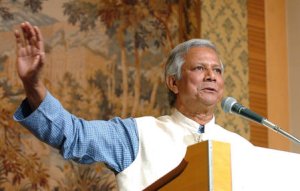 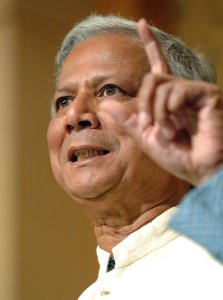 Health News // 11 months ago
Experts: Increasing global COVID-19 vaccination rate could slow variant spread
The Delta variant of COVID-19 has highlighted a fear shared by infectious disease experts worldwide: That increasingly dangerous mutations will continue to crop up until most people around the globe are vaccinated.

U.S. News // 4 years ago
Myanmar's Suu Kyi cancels trip to U.N. amid Rohingya criticism
Amid an exodus of Rohingya Muslims from Myanmar, the nation's leader and Nobel laureate, Aung San Suu Kyi, has called off a trip to the U.N. General Assembly.

Opinion // 5 years ago
So what if Hillary Clinton met with donors?
Slap the handcuffs on. Lock Hillary Clinton up without trial! Maybe, as one Donald Trump ally suggested, just summarily execute her for treason.

Muhammad Yunus (Bengali: মুহাম্মদ ইউনুস, pronounced Muhammôd Iunus) (born 28 June 1940) is a Bangladeshi economist and founder of the Grameen Bank, an institution that provides microcredit (small loans to poor people possessing no collateral) to help its clients establish creditworthiness and financial self-sufficiency. In 2006 Yunus and Grameen received the Nobel Peace Prize. Yunus himself has received several other national and international honors.

He previously was a professor of economics where he developed the concepts of microcredit and microfinance. These loans are given to entrepreneurs too poor to qualify for traditional bank loans. He is the author of Banker to the Poor and a founding board member of Grameen America and Grameen Foundation. In early 2007 Yunus showed interest in launching a political party in Bangladesh named Nagorik Shakti (Citizen Power), but later discarded the plan. He is one of the founding members of Global Elders.

Yunus also serves on the board of directors of the United Nations Foundation, a public charity created in 1998 with entrepreneur and philanthropist Ted Turner’s historic $1 billion gift to support United Nations causes. The UN Foundation builds and implements public-private partnerships to address the world’s most pressing problems, and broadens support for the UN.

FULL ARTICLE AT WIKIPEDIA.ORG
This article is licensed under the GNU Free Documentation License.
It uses material from the Wikipedia article "Muhammad Yunus."