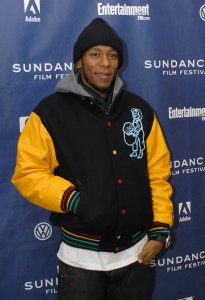 Entertainment News // 7 years ago
Leonardo DiCaprio outbids Paris Hilton for Chanel purse
Leonardo DiCaprio outbid socialite Paris Hilton for a Chanel purse worth over $11,000 at a Cannes charity auction.
Blog // 8 years ago
Gabourey Sidibe throws epic shade at fat shamers
The Internet can be a mean place, even for celebrities, especially for the ones who don't fall inside the bounds of conventional beauty.
Odd News // 8 years ago
The almanac
UPI Almanac for Wednesday, Dec. 11, 2013.
Music // 8 years ago
Mos Def is force-fed during Gitmo human-rights protest
Rapper and actor Mos Def allowed himself to be force-fed to spotlight the treatment of hunger strikers at the U.S. military lockup in Guantanamo Bay, Cuba.

I read his (self-titled) autobiography, which is a very good read

Dante Terrell Smith (born December 11, 1973) is an Emmy- and Golden Globe-nominated American actor and a Grammy-nominated MC known by the stage name Mos Def. Mos Def started his hip hop career in a group called Urban Thermo Dynamics, after which he appeared on albums by Da Bush Babees and De La Soul. With Talib Kweli, he formed the duo Black Star, who released the album Black Star in 1998. He was a major force in the late 1990s underground hip hop explosion spearheaded by Rawkus Records. As a solo artist he has released the albums Black on Both Sides in 1999, The New Danger in 2004, and True Magic, 2006.

Initially recognized for his musical output, Mos Def's screen work since the early 2000s has established him as one of only a handful of rappers who have garnered critical approval for their acting work. Mos Def has also been active on several social and political issues and was particularly vocal in the wake of Hurricane Katrina in 2005.

Mos Def was born Dante Terrell Smith in the Roosevelt Houses of Bedford-Stuyvesant, Brooklyn, New York City, the son of Darrell Toler. He has two younger brothers, Abdul Rahman (a.k.a. "Gold Medal Man," who is Mos' full-time DJ) and Anwar Superstar. He also has a younger sister, Ces (Casey) Smith. In addition he also has another younger brother Jermone Victor Moulton who resides in Brooklyn and shares the same mother Umi Smith. Mos Def and his brothers are all converts to Islam. Mos Def was first exposed to Islam at age thirteen by his father. He became a Muslim at age nineteen after getting to know Muslim rappers including Ali Shaheed Muhammad and Q-Tip of the group A Tribe Called Quest. Mos Def grew up during the golden age of hip-hop and has been rapping and acting since he was six years old. He attended Philippa Schuyler Middle School in Bushwick, Brooklyn. For high school, Mos Def attended The Fieldston School after moving to the Bronx.

FULL ARTICLE AT WIKIPEDIA.ORG
This article is licensed under the GNU Free Documentation License.
It uses material from the Wikipedia article "Mos Def."