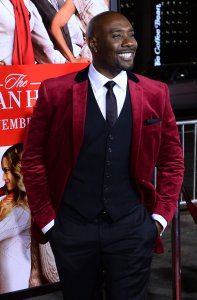 Morris L. Chestnut (born January 1, 1969) is an American film and television actor. He is perhaps best known for his roles as teenage father Ricky Baker in the 1991 film Boyz N the Hood, groom-to-be Lance Sullivan in the 1999 film The Best Man and as Dave, a struggling husband in the 2009 film Not Easily Broken.

Chestnut was born in Cerritos, California where he graduated from Richard Gahr High School in 1986. He subsequently studied finance and drama at California State University, Northridge.

Chestnut's first professional acting role was as "Jason" in Freddy's Nightmares: A Nightmare on Elm Street: The Series in the episode "A Family Affair" (season 2, episode 19) which aired on February 18, 1990. His first feature film role was as "Ricky Baker" in Boyz N the Hood (1991). He followed that up with roles in various TV movies. Chestnut also played a role on Patti LaBelle's short-lived sitcom Out All Night. His career continued to rise steadily with co-starring roles in standard big-budget studio films like Under Siege 2 (1995) and G.I. Jane (1997). As the decade ended, movies about young, professional African-Americans and their problems with family and relationships began to fill the cineplexes creating roles for Chestnut and many other talented black actors who had been stuck in minor television and film roles.

FULL ARTICLE AT WIKIPEDIA.ORG
This article is licensed under the GNU Free Documentation License.
It uses material from the Wikipedia article "Morris Chestnut."
Back to Article
/