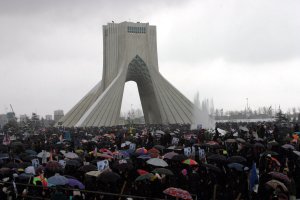 Top News // 5 months ago
The Almanac
On Oct. 26, 1942, Allied troops moving through the Egyptian front captured 1,450 Axis prisoners and pulverized the enemy line.

World News // 8 months ago
Iran says it arrested U.S.-based terror leader linked to mosque bombing
Iran's Intelligence Ministry said Saturday that it arrested the leader of what it describes as a terror group based in the United States.

World News // 1 year ago
Iran celebrates 1979 overthrow of U.S.-aligned shah
Iranians on Tuesday celebrated the 41st anniversary of the 1979 Islamic Revolution with rallies across the nation.

World News // 1 year ago
Iran celebrates 1979 U.S. Embassy takeover, 444-day hostage crisis
Rallies and events were staged across Iran Monday to celebrate the 40th anniversary of the start of what would last for 444 days and be known as the Iran hostage crisis.

Voices // 2 years ago
U.S. will have to accept second-class status in Middle East
You may not have noticed it -- the chair that wasn't there. The seven-year Syrian war is ending with a government victory. The U.S. is missing from peace talks.

Top News // 4 years ago
The Almanac
On Oct. 26, 1942, Allied troops moving through the Egyptian front captured 1,450 Axis prisoners, routed Nazi tanks in the armored clash and pulverized the enemy line.
World News // 7 years ago
U.S. Congress passes bill banning Iranian diplomat from U.S.
The U.S. Congress passed a bill banning an Iranian envoy to the UN from entering the United States.
Defense News // 7 years ago
Israeli arms dealers held over seized F-4 parts for Iran
Israeli arms dealers Eli Cohen and Avichai Weinstein reportedly have been arrested on suspicion of trying to smuggle F-4 fighter components to Iran amid a shake-up in the Defense Ministry over concerns that supervision of arms exports is too lax.

Mohammad Rezā Shāh Pahlavi, Shah of Iran, (Persian: محمدرضا شاه پهلوی ; 26 October 1919 – 27 July 1980), was the emperor of Iran from 16 September 1941, until his overthrow by the Iranian Revolution on 11 February 1979. He was the second and last monarch of the House of Pahlavi of the Iranian monarchy. Mohammad Reza Shah Pahlavi held several titles: His Imperial Majesty, Shahanshah (King of Kings, Emperor), Aryamehr (Light of the Aryans) and Bozorg Arteshtārān (Head of the Warriors, Persian: بزرگ ارتشتاران).

Pahlavi came to power during World War II after an Anglo-Soviet invasion forced the abdication of his father Reza Shah. His rule oversaw the nationalization of the Iranian oil industry under the prime ministership of Mohammad Mosaddeq. During the Shah's reign, Iran marked the anniversary of 2,500 years of continuous monarchy since the founding of the Persian Empire by Cyrus the Great. His White Revolution – a series of economic and social reforms intended to transform Iran into a global power – succeeded in modernizing the nation, nationalizing many natural resources and extending suffrage to women.

Although a Muslim himself, the Shah gradually lost support from the Shi'a clergy of Iran, particularly due to his strong policy of modernization, secularization and conflict with the traditional class of merchants known as bazaari, and recognition of Israel. Clashes with the Islamists, increased communist activity and a 1953 period of political disagreements with Mohammad Mosaddeq – eventually leading to Mosaddeq's ousting – caused what the Shah's opponents believe to have been an increasingly autocratic rule.

FULL ARTICLE AT WIKIPEDIA.ORG
This article is licensed under the GNU Free Documentation License.
It uses material from the Wikipedia article "Mohammad Reza Pahlavi."
Back to Article
/