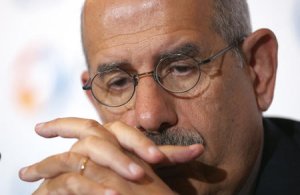 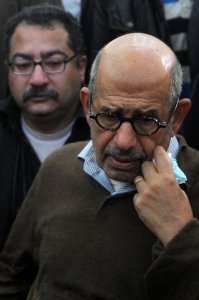 It's better for President Obama not to appear that he is the last one to say to President Mubarak, it's time for you to go

If the people really want me to be a candidate, I shan't let them down

If the people really want me to be a candidate, I shan't let them down

Mohamed Mustafa ElBaradei (Arabic: محمد مصطفى البرادعى‎, Muḥammad Muṣṭafā al-Barādʿī, Egyptian Arabic pronunciation: ; born June 17, 1942) is an Egyptian law scholar and diplomat. He was the Director General of the International Atomic Energy Agency (IAEA), an inter-governmental organisation under the auspices of the United Nations, from December 1997 to November 2009. ElBaradei and the IAEA were jointly awarded the Nobel Peace Prize in 2005. ElBaradei was also an important figure in the 2011 Egyptian protests which culminated in the resignation of Hosni Mubarak.

ElBaradei was born and raised in Cairo, Egypt. He was one of five children of Mostafa ElBaradei, an attorney who headed the Egyptian Bar Association and often found himself at odds with the regime of President Gamal Abdel Nasser. ElBaradei's father was also a supporter of democratic rights in Egypt, supporting a free press and an independent judiciary.

ElBaradei is married to Aida El-Kachef, an early-childhood teacher. They have two children: a daughter, Laila, who is a lawyer living in London; and a son, Mostafa, who is an IT manager living in Cairo. They also have one granddaughter, Maya.

FULL ARTICLE AT WIKIPEDIA.ORG
This article is licensed under the GNU Free Documentation License.
It uses material from the Wikipedia article "Mohamed El Baradei."
Back to Article
/