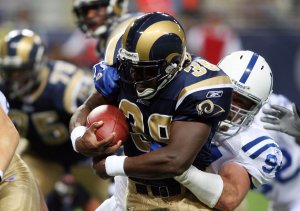 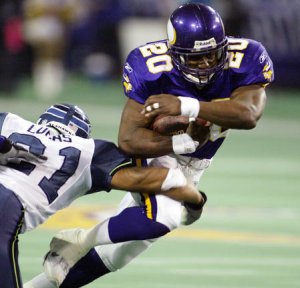 Maurece Jabari "Moe" Williams (born July 26, 1974 in Columbus, Georgia) is a former American football running back in the National Football League (NFL). He formerly played for the Minnesota Vikings and Baltimore Ravens. He attended the University of Kentucky.

While attending Spencer High School in Columbus, Georgia, Williams was a standout runningback in football. As a senior, he garnered All-American honors, was named the Georgia High School Player of the Year, and lead his team to its first playoff appearance in 24 years.

At the University of Kentucky, Williams made an immediate impact, setting the freshman rushing record with 986 yards in 1993. He gained 58 yards on 13 carries in the Peach Bowl at the conclusion of his freshman season.

FULL ARTICLE AT WIKIPEDIA.ORG
This article is licensed under the GNU Free Documentation License.
It uses material from the Wikipedia article "Moe Williams."
Back to Article
/