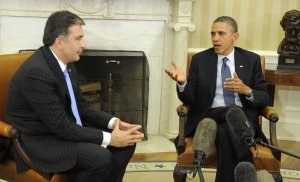 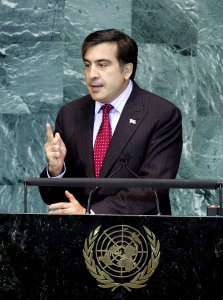 World News // 6 months ago
European Court rules Russia violated human rights in 2008 Georgia war
The European Court of Human Rights ruled Thursday that Russia committed violations during the Georgia war and after the cease-fire in the so-called "buffer zone."

World News // 3 years ago
Ex-Georgia president arrested again in Ukraine
Mikheil Saakashvili, the former president of Georgia, was arrested in Kiev, Ukraine on Friday, three days after his supporters freed him from a police van.

World News // 6 years ago
Saakashvili signs deal with U.S. for regional support of Odessa
Mikheil Saakashvili, the Governor of Ukraine's Odessa Oblast, signed a memorandum with the United States Tuesday assuring American support in the region.

World News // 6 years ago
Russian politician stirs debate after Ukraine appointment
Maria Gaidar was nominated last Friday to assume the role as a deputy governor in the Ukrainian region of Odessa.

We are asking our northern neighbor to refrain from any provocations

NATO drills start in Georgia amid tension May 06, 2009

I think he is disappointed with (the) failure to obtain a NATO membership program for Georgia and secure Europe's support. He seems to have realized there is a need for dialogue with Russia

It's getting cold in Georgia's regions now, and the main question facing the Georgian public, facing each of us, is whether we will manage to ensure that people are provided with electricity, heat and gas without interruption in the postwar period, in conditions of world economic crisis and in conditions where there is a threat of sabotage and to ensure that it is not dark and cold in Georgia

This year the Georgian energy sector has a minimum dependence on Russian gas supplies, it is just 10 percent that we are getting from the amount of gas transported (further on) to Armenia. I do not think that Russia will leave Armenia without gas

Mikheil Saakashvili (Georgian: მიხეილ სააკაშვილი, IPA: ; born 21 December 1967) is a Georgian politician, the third and current President of Georgia and leader of the United National Movement Party. Involved in the national politics since 1995, Saakashvili became president on 25 January 2004 after President Eduard Shevardnadze resigned in a November 2003 bloodless "Rose Revolution" led by Saakashvili and his political allies, Nino Burjanadze and Zurab Zhvania. Saakashvili was re-elected in the Georgian presidential election on 5 January 2008. He is widely regarded as a pro-NATO and pro-USA leader who spearheaded a series of political and economic reforms. In 2010, he had a 67% approval rating despite being criticized by the opposition for his alleged authoritarian tendencies and electoral fraud.

Some non-Georgian sources spell Saakashvili's first name via the Russian version of the name Mikhail. In Georgia, he is commonly known as "Misha," a hypocorism for Mikheil.

Mikheil Saakashvili was born in Tbilisi, capital of the Georgian Soviet Socialist Republic in the Soviet Union, to a Georgian intelligentsia family. His father, Nikoloz Saakashvili, is a physician who practices medicine in Tbilisi and directs a local Balneological Center. His mother, Giuli Alasania, is a historian who lectures at Tbilisi State University.

FULL ARTICLE AT WIKIPEDIA.ORG
This article is licensed under the GNU Free Documentation License.
It uses material from the Wikipedia article "Mikheil Saakashvili."
Back to Article
/