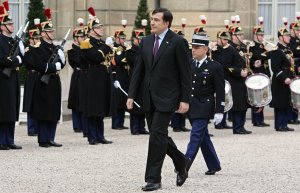 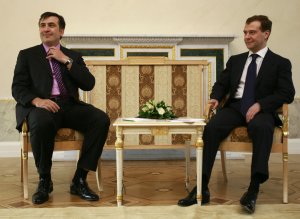 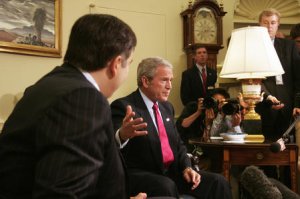 Russia is fighting a war with us on our territory

Georgia is not going to use its armed forces as its main argument, and it will never start military actions first. Our main weapon is unity, consolidation, wise politics and cautiousness

The Cold War is over and we will not give up our independence. Russia cannot treat us as their former colony

Mikheil Nikolozis dze Saak'ashvili (Georgian: მიხეილ ნიკოლოზის ძე სააკაშვილი, IPA: ; born 21 December 1967) is a Georgian politician, the third and current President of Georgia and leader of the United National Movement Party. Saakashvili became president on 25 January 2004 after President Eduard Shevardnadze resigned in a November 2003 bloodless "Rose Revolution" led by Saakashvili and his political allies, Nino Burjanadze and Zurab Zhvania. Saakashvili was re-elected in the early Georgian presidential election of 5 January 2008. He is widely regarded as a pro-Western leader who has spearheaded a series of political and economic reforms, but has been criticized for authoritarian tendencies and worsening human rights record in the country. Opposition parties have also accused him of rigging elections and using riot police to crush opposition rallies.

Some non-Georgian sources spell Saakashvili's first name via the Russian (Михаил Саакашвили) as Mikhail. In Georgia, he is commonly known as "Misha," a hypocorism for Mikheil.

He is married to Sandra E. Roelofs, of Dutch origin, and has two sons, Eduard and Nikoloz. Apart from his native Georgian, he speaks fluent English, French, Russian, and Ukrainian, and has some command of Ossetian and Spanish.

FULL ARTICLE AT WIKIPEDIA.ORG
This article is licensed under the GNU Free Documentation License.
It uses material from the Wikipedia article "Mikhail Saakashvili."