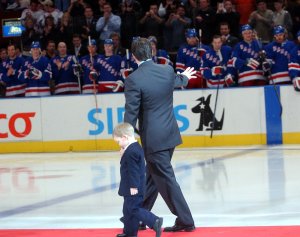 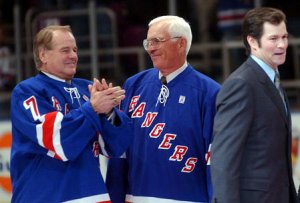 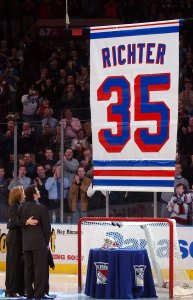 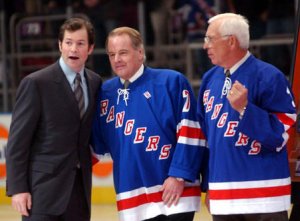 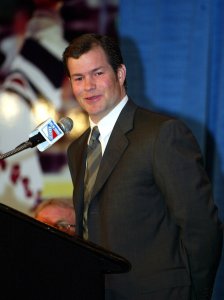 I guess anyone under the circumstances would want to be here

Russia didn't find their game in the first two periods

Michael Thomas Richter (born September 22, 1966 in Abington, Pennsylvania) is a former National Hockey League (NHL) goaltender. One of the most successful American-born goaltenders in history, he is best known for having led the New York Rangers to the Stanley Cup title in 1994 and for repeatedly representing the United States in international play. Due to his success, Richter is a part of the Class of 2008 in the U.S. Hockey Hall of Fame, alongside his former Rangers teammate Brian Leetch.

He attended and played for Germantown Academy, Fort Washington, Pennsylvania, he also played at the Wissahickon Skating Club. After playing for the United States in the World Junior championships in 1985, he played for the University of Wisconsin-Madison from 1985–1987, and the Rangers made him the 28th overall pick in the 1985 NHL Entry Draft. He would again represent the US in the World Junior championships, World championships, and the 1988 Calgary Olympics before making his NHL debut in the 1989 playoffs. Though he lost the one game in which he played, he was soon a regular member of the club, posting 12 wins against 5 losses in his rookie season as the Rangers' backup goaltender. The next two seasons, he would split playing time with the Rangers' veteran goaltender John Vanbiesbrouck, he was selected to represent the U.S. in the Canada Cup.

Vanbiesbrouck was traded before the 1993–94 season and Richter had his first season as the team's number one goaltender, posting a career-best 42 wins and 2.57 goals-against average as the Rangers won the Presidents' Trophy. His play was a key factor in the Rangers' Stanley Cup championship win over the Vancouver Canucks. During the season, Richter was named MVP of the All-Star Game. Because of this, the Rangers are the only team to have hosted an NHL All-Star Game, had one of their own named MVP of an All-Star Game, win the Presidents' Trophy, and win the Stanley Cup in one single season. He became the eighth goaltender in history to post four shutouts in one playoff season, and over the next few years he would consistently be ranked among the world's top goaltenders. He led the United States to victory in the 1996 World Cup of Hockey, with his efforts earning him Most Valuable Player honors.

FULL ARTICLE AT WIKIPEDIA.ORG
This article is licensed under the GNU Free Documentation License.
It uses material from the Wikipedia article "Mike Richter."