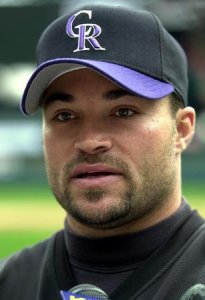 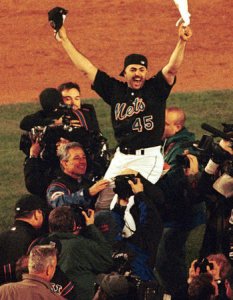 Michael William Hampton (born September 9, 1972 in Brooksville, Florida) is a Major League Baseball starting pitcher for the Houston Astros. He bats right-handed and throws left-handed. Hampton is well-known for being one of the best active hitting pitchers, as well as (more recently) for his large contract and frequent injuries.

Mike Hampton was drafted by the Seattle Mariners in the 5th round of the 1990 draft. He first broke into the major leagues in 1993, but had a disappointing start. After the season, he found himself traded to the Houston Astros, where he would become a star.

Hampton became a starter for Houston in 1995, and kept his ERA under 4.00 for every season he was with the Astros. In 1999, Hampton had his best year. He broke through with a 22–4 record, best in the National League, and a 2.90 ERA. He picked up his first of five Silver Slugger Awards and narrowly finished second in National League Cy Young Award voting to Randy Johnson.

FULL ARTICLE AT WIKIPEDIA.ORG
This article is licensed under the GNU Free Documentation License.
It uses material from the Wikipedia article "Mike Hampton."