U.S. News // 1 year ago
Boeing's Starliner capsule rolls out for first spaceflight
The newest space capsule designed to carry people, Boeing's CST-100 Starliner, rolled out of its manufacturing building and headed toward a launch pad Thursday morning at Kennedy Space Center in Florida. 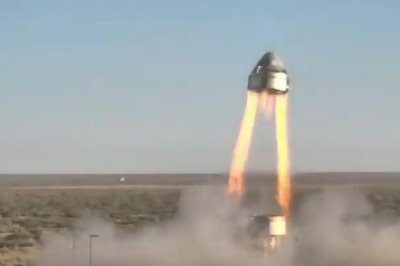 You totally fixed us up on the inside and the outside, and the results speak for themselves

I'm very concerned she does not know who her father is. I would really like to hold her in my hands and see her every minute of every day

I'd always thought of myself as a shuttle guy. Now I am a Soyuz guy

We have a lot of science to do. I am excited to be the NASA science officer

I think all of us, with all the changes that are going on with our country's space program and NASA, all of us professional astronauts are looking into our hearts to see what we're going to do next

Edward Michael "Mike" Fincke (born 14 March 1967 in Pittsburgh, Pennsylvania, but considers Emsworth, Pennsylvania to be his home town) is a United States Air Force officer and a NASA astronaut, who has served two tours aboard the International Space Station as a flight engineer and commander. He is a researcher for the Advanced Diagnostic Ultrasound in Microgravity Project. Fincke is conversant in Japanese and Russian. He is married to Renita Saikia and together, they have three children; son Chandra and daughters Tarali and Surya.

Fincke has logged 365 days in space, placing him third behind Peggy Whitson and Michael Foale for the most time in space by an American astronaut. He has the record along with Gennady Padalka for the most amount of ISS based spacewalks (6)-- all in the Russian Orlan spacesuit.

Fincke graduated from Sewickley Academy in Sewickley, Pennsylvania in 1985. He attended the Massachusetts Institute of Technology (MIT) on an Air Force ROTC scholarship and graduated in 1989 with a bachelor's degree in aeronautics and astronautics as well as a bachelor's degree in Earth, atmospheric and planetary sciences. He then received a master's degree in aeronautics and astronautics from Stanford University in 1990 and second master's degree in planetary geology from the University of Houston–Clear Lake in 2001. He also attended El Camino College in Torrance, California,where he studied Japanese and Geology.

FULL ARTICLE AT WIKIPEDIA.ORG
This article is licensed under the GNU Free Documentation License.
It uses material from the Wikipedia article "Mike Fincke."
Back to Article
/