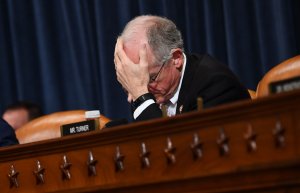 U.S. News // 2 years ago
Trump Russia probe: Who's involved, where it stands
Here's a rundown of the major players in the investigation into Russian attempts to interfere in the U.S. presidential election and how are they connected.

U.S. News // 3 years ago
Facebook faces FTC, state probes; Cambridge Analytica suspends CEO
There's debate on Capitol Hill on what to do about an analytics firm that purportedly mined data from millions of Facebook users for political purposes.

Conaway was born in Borger in the Texas Panhandle northeast of Amarillo. He graduated in 1966 from Permian High School in Odessa in Ector County. He is a 1970 graduate of East Texas State University (since renamed Texas A&M University-Commerce). He is married to Suzanne Conaway and has four children.

Prior to his election to the United States Congress, Conaway served in the United States Army from 1970 to 1972, was an accountant, a chief financial officer at a bank and at an oil and gas exploration firm operated by George W. Bush. From 1981 until 1986, Conaway was the chief financial officer of Bush's failed Arbusto Energy Inc. He has long been friends with Bush, and the two mixed in many of the same social circles in Midland. He also served on the Midland Independent School District Board from 1985 to 1988.

FULL ARTICLE AT WIKIPEDIA.ORG
This article is licensed under the GNU Free Documentation License.
It uses material from the Wikipedia article "Mike Conaway."
Back to Article
/