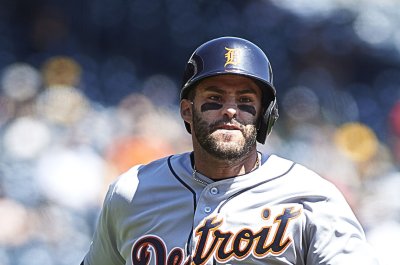 Sports News // 4 years ago
Bobby Wilson instrumental in Texas Rangers win over Detroit Tigers
DETROIT -- Bobby Wilson is one of those guys who spend most of their career in the shadows.

Avilés graduated from Middletown High School in Middletown, New York in 1999 and was a Division II All-American shortstop at Concordia College, in Bronxville, New York. He was named Division II player of the year in 2003, after hitting .500 with 83 runs, 22 homers and 65 RBI in 45 games.

His professional baseball career began when he was chosen in the 7th round of the 2003 Major League Baseball Draft by the Kansas City Royals and offered an "insulting" $1,000 signing bonus. He spent 2004 with the Wilmington Blue Rocks in the Carolina League and 2005 with the Wichita Wranglers in the Texas League. He then spent 2006 and 2007 with the Omaha Royals of the Pacific Coast League, becoming the Royals' Minor League Player of The Year in 2007. He started 2008 in the minors, batting .338 with 10 home runs and 42 RBI in just 50 games with Omaha.

FULL ARTICLE AT WIKIPEDIA.ORG
This article is licensed under the GNU Free Documentation License.
It uses material from the Wikipedia article "Mike Aviles."
Back to Article
/