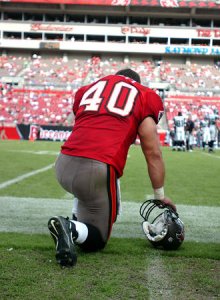 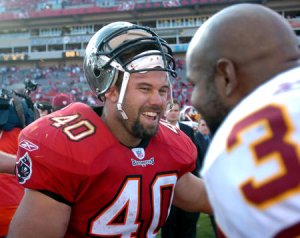 I don't know. They both have the skull and swords and all of that, but I know it's going to be a battle on Sunday

It's left a bad taste in our mouths, made for a long offseason two years in a row, and we want to get rid of that taste

Michael Joseph Alstott (born December 21, 1973, Joliet, Illinois), is a former American football fullback in the National Football League. He spent his entire 12-year career with the Tampa Bay Buccaneers. He played college football at Purdue. During his career, Alstott was selected to six Pro Bowls and earned a Super Bowl ring with the Buccaneers in Super Bowl XXXVII.

Mike first played for the Homer Stallions. In grade school he left the Stallions and joined the New Lenox Mustangs. He lettered in both football and baseball at Joliet Catholic Academy in his hometown of Joliet, Illinois. As a junior, his football team won the state championship with a 14-0 record. Alstott also threw the winning two point conversion in the championship game. He was a PARADE football All-American and was recognized as Player of the Year by the Chicago Sun Times.

Alstott starred at Purdue University, where he became the first Boilermaker named MVP in three consecutive seasons. Alstott scored 12 touchdowns as a sophomore, 14 as a junior and 11 as a senior, and held the Purdue rushing touchdown record with 39 until Kory Sheets broke it in 2008. He averaged 5.6 yards per attempt during his Purdue career before graduating with a bachelor's degree in business. He finished as Purdue's all-time leading rusher with 3,635 yards, including a school-best 1,436 yards in 1995.

FULL ARTICLE AT WIKIPEDIA.ORG
This article is licensed under the GNU Free Documentation License.
It uses material from the Wikipedia article "Mike Alstott."
Back to Article
/