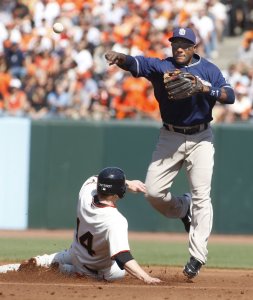 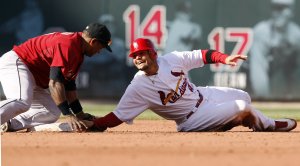 Miguel Odalis Tejada (born on May 25, 1974, in Baní, Dominican Republic) is a Major League Baseball infielder for the San Francisco Giants. He began his first six seasons of his career with the Oakland Athletics, where he began his streak of 1,152 consecutive games, that ended with the Baltimore Orioles on June 22, 2007. In 2002, he was awarded the AL MVP award, and he was the MVP of the 2005 All-Star Game.

His nickname is "La Gua Gua" which means "the bus" in certain Spanish dialects, as Tejada is known to drive in runs. On February 11, 2009, he pleaded guilty to one count of perjury for lying to Congress in his testimony on whether or not Rafael Palmeiro lied about his steroid use.

Tejada grew up in extreme poverty in Baní, a city approximately 40 miles (65 km) southwest of Santo Domingo, capital of the Dominican Republic. Miguel Tejada grew up idolizing the Baltimore Orioles shortstop Cal Ripken Jr. Attended Saint Leo University during the Spring Semester of 2007. Led the Lions in all batting, pitching, and defensive categories. Miguel Tejada's rise from the slums of Baní through the minors and into the Major Leagues is chronicled in the book Away Games: The Life and Times of a Latin Ballplayer by Marcos Breton and Jose Luis Villegas. Away Games describes the struggles of Dominican players in general and Tejada in particular as they arrive in the U.S. speaking very little English often in small towns playing for minor league teams with dreams of making it big.

FULL ARTICLE AT WIKIPEDIA.ORG
This article is licensed under the GNU Free Documentation License.
It uses material from the Wikipedia article "Miguel Tejada."
Back to Article
/