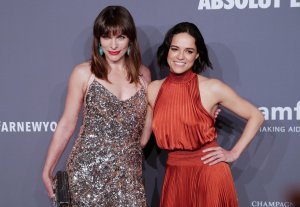 Movies // 3 weeks ago
Charlize Theron poses with Jason Momoa in 'Fast X' set photos
Charlize Theron has released a number of photos from the set of "Fast X," the upcoming tenth installment in the "Fast and the Furious" series.

Movies // 1 year ago
Vin Diesel welcomes audiences back to theaters with 'F9' promo
Actor Vin Diesel introduced footage from "F9" in a new promo video celebrating the magic of going to the movies.

Mayte Michelle Rodriguez (born July 12, 1978), known professionally as Michelle Rodriguez, is an American actress. Following on from her breakthrough role in 2000's Girlfight, she is best known for playing tough-girl roles and starring in Hollywood blockbusters such as The Fast and the Furious, Resident Evil, S.W.A.T., Avatar, Machete and Battle: Los Angeles, as well as for her role as Ana Lucia Cortez in the television series Lost (2005–2006, 2009–2010).

Michelle Rodriguez was born in San Antonio, Texas, the daughter of Carmen Milady (née Pared), a native of the Dominican Republic, and Rafael Rodriguez, a Puerto Rican who served in the United States Army. She has a total of ten siblings and half-siblings. She was partly raised by her devoutly religious maternal grandmother and was brought up as one of Jehovah's Witnesses (her mother's religion), though she has since abandoned that faith. Rodriguez moved to the Dominican Republic with her mother when she was eight and lived in Puerto Rico until the age of eleven, later settling in Jersey City, New Jersey. She dropped out of high school, but later earned her GED; in total she was expelled from five schools. Rodriguez briefly attended business school before quitting to pursue a career in acting, with the ultimate goal of becoming a writer and director.

Having run across an ad for an open casting call and attending her first audition, Rodriguez beat 350 other applicants to win her first role in the low-budget 2000 independent film, Girlfight. With her performance as Diana Guzman, a troubled teen who decides to channel her aggression by training to become a boxer, Rodriguez accumulated several awards and nominations for the role in independent circles, including major acting accolades from the National Board of Review, Deauville Film Festival, Independent Spirit Awards, Gotham Awards, Las Vegas Film Critics Sierra Awards, and many others. The film itself took home a top prize at the Sundance and won Award of the Youth at the Cannes Film Festival.

FULL ARTICLE AT WIKIPEDIA.ORG
This article is licensed under the GNU Free Documentation License.
It uses material from the Wikipedia article "Michelle Rodriguez."