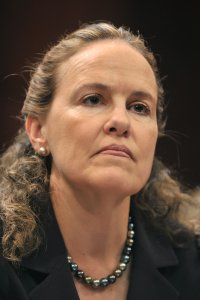 Defense News // 2 months ago
Outgoing Navy secretary wants new fleet near Indian, Pacific Oceans
Navy Secretary Kenneth Braithwaite said Tuesday in a speech that he has asked the Navy to establish a new fleet focused on the border between the Indian and Pacific Oceans.
Special Reports // 8 years ago
Panetta focused on Afghan mission
The Pentagon said U.S. Defense Secretary Leon Panetta is committed to working with allies on a strategy to draw forces from Afghanistan by the end of 2014.
Special Reports // 8 years ago
Flournoy: U.S. military isn't in decline
A U.S. military responding to a changing set of priorities shouldn't be mistaken as a military in decline, an outgoing senior defense official said.
U.S. News // 9 years ago
Top Defense Dept. adviser resigns
Michele Flournoy, one of the highest-ranking women in the history of the Pentagon, says she plans to resign to spend more time with her three children.
World News // 9 years ago
China, U.S. hold annual defense talks
China and the United States held their annual defense talks Wednesday as Beijing officials noted a growing U.S. presence in the Asia-Pacific region.
U.S. News // 9 years ago
Mullen backs 'aggressive' Afghan drawdown
U.S. Joint Chiefs of Staff Chairman Adm. Michael Mullen testified Thursday he supports President Obama's "aggressive" withdrawal plan in Afghanistan.
Special Reports // 1 decade ago
Mullen talks detente with Beijing
Washington and Beijing may not always see eye-to-eye, but there is potential to bolster bilateral military engagement, the top U.S. military official said.
Special Reports // 1 decade ago
U.S. backs military aid to Lebanon
The U.S. commitment to Beirut includes assistance to the Lebanese armed forces, the U.S. undersecretary of defense for policy said in Beirut.
U.S. News // 1 decade ago
Future, Afghanistan on NATO's agenda
NATO's course in the next century and its Afghanistan mission will be key issues when alliance leaders meet in Portugal, the U.S. Defense Department said.

We now stand at a crossroads in our history -- a pivot point from which our relations with friends and foes could be transformed for the better, or events could spiral out of our control and plunge the nation into a period of fractious relations, intensified anti-Americanism, and a prolonged period during which our very way of life could be threatened. The stakes are as high as they come for this question and the next

The military operation under way in Afghanistan reflects a fundamentally different concept of operations. Air and missile strikes are being used not only to destroy highly valued assets of both the Taliban and al Qaida but also to flush out terrorists from hiding in the hope that special operations forces can interdict them on the move. The air and missile strikes are also being used to level the playing field militarily within Afghanistan so that opposition groups like the Northern Alliance can be more effective in taking on the Taliban. In the days and weeks to come, we can expect to see the United States providing direct support to these forces as they engage the Taliban on the ground. The ultimate aim of these operations is to create conditions that give rise to regime change within Afghanistan, undertaken by Afghans -- not the United States --with the support of the international community

The development of Sino-U.S. military ties has not been very smooth and still faces some obstacles

Michèle Angelique Flournoy (born December 14, 1960) is Under Secretary of Defense for Policy of the United States. She was confirmed in the position by the U.S. Senate on February 9, 2009. She founded and was named President of the Center for a New American Security (CNAS) in January 2007. Prior to co-founding CNAS, she was a Senior Adviser at the Center for Strategic and International Studies, where she worked on a broad range of defense policy and international security issues. Previously, she was a distinguished research professor at the Institute for National Strategic Studies at the National Defense University (NDU), where she founded and led the university’s Quadrennial Defense Review (QDR) working group, which was chartered by the Chairman of the Joint Chiefs of Staff to develop intellectual capital in preparation for the Department of Defense’s 2001 QDR.

FULL ARTICLE AT WIKIPEDIA.ORG
This article is licensed under the GNU Free Documentation License.
It uses material from the Wikipedia article "Michele Flournoy."
Back to Article
/