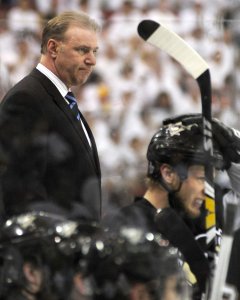 NHL // 3 years ago
Montreal Canadiens back in the NHL playoffs, clinch division with win over Florida Panthers
SUNRISE, Fla. -- The 24-time Stanley Cup champion Montreal Canadiens, with a past that qualifies them as hockey royalty, didn't even make the playoffs last year.

NHL // 4 years ago
Max Pacioretty, Montreal Cadadiens edge Carolina Hurricanes
MONTREAL -- The Montreal Canadiens have been waiting for some offense from their second line. On this night, they came through.

First of all, we believe we got robbed. There's no doubt about that

Michel Therrien (born November 4, 1963) is a former hockey player and head coach for the Montreal Canadiens and the Pittsburgh Penguins. Therrien coached the Canadiens for three seasons, taking them to the Eastern Conference semi-finals in the 2002 Stanley Cup Playoffs. During the 2006–07 season, he coached the Penguins to one of the most successful single-season improvements in NHL history, finishing with a 47–24–11 record (105 pts), a berth in the 2007 Stanley Cup playoffs, and a nomination for the Jack Adams Award, as the NHL's best coach. The following season, the Penguins under Therrien made it to the 2008 Stanley Cup Finals, ultimately losing to the Detroit Red Wings in six games. On February 15, 2009, with the Penguins struggling to make the playoffs, the Penguins organization announced that it had relieved Therrien of coaching duties and had promoted its AHL affiliate Wilkes-Barre Scranton Penguins head coach Dan Bylsma to serve as interim head coach of the Pittsburgh Penguins.

Prior to his coaching career, Therrien played three years as a defenceman in the AHL, compiling a total of 86 points in 206 games and winning the Calder Cup in 1985 with the Sherbrooke Canadiens, on the same team as eventual Hall-of-Famer Patrick Roy. Before coaching in the professional leagues, Therrien was a coach in the Quebec Major Junior Hockey League. He is a single parent of two children, Elizabeth and Charles.

After stumbling out to a 5–13–2 record, the Montreal Canadiens fired their head coach Alain Vigneault and hired rookie Michel Therrien. The Canadiens went 23–27–13 under Michel and missed the playoffs.

FULL ARTICLE AT WIKIPEDIA.ORG
This article is licensed under the GNU Free Documentation License.
It uses material from the Wikipedia article "Michel Therrien."
Back to Article
/