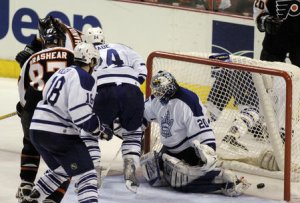 We picked up a big 6-5 center who is, in our opinion, the complete package

Michal Handzuš was drafted 101st overall in the 1995 NHL Entry Draft by the St. Louis Blues, playing with them for two and a half seasons from 1998–99 to 2000–01. He finished second in voting for the Frank J. Selke Trophy following the 1999–2000 season. He was then traded on March 13, 2001 with Ladislav Nagy, Jeff Taffe and two first-round draft picks to the Phoenix Coyotes for Keith Tkachuk. Handzuš spent two seasons with Phoenix. On June 12, 2002, Handzuš was traded with Robert Esche to the Philadelphia Flyers for Brian Boucher and a third-round draft pick. On December 5, 2002, he became only the second player in NHL history to score a penalty shot goal in overtime. In the 2003–04 season he finished second on the Flyers with 58 points, and signed a three-year with Philadelphia in the off-season. During the 2004–05 NHL lockout he played for the HKm Zvolen, which reached the playoff finals in the Slovak Extraliga. On August 4, 2006, he was traded to the Chicago Blackhawks for Kyle Calder. Only eight games into his season with Chicago, however, Handzuš suffered a torn ACL which sidelined him for the remainder of the 2006–2007 season.

FULL ARTICLE AT WIKIPEDIA.ORG
This article is licensed under the GNU Free Documentation License.
It uses material from the Wikipedia article "Michal Handzus."
Back to Article
/