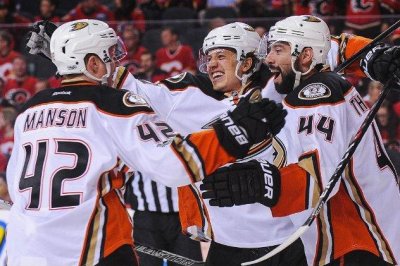 NHL // 3 years ago
Anaheim Ducks rally to take 3-0 series lead over Calgary Flames
CALGARY, Alberta -- Playing in his 100th NHL playoff game, Corey Perry had belief that the Anaheim Ducks could battle back from a three-goal deficit against the Calgary Flames.

NHL // 3 years ago
NHL roundup: recap, scores, notes for every game played on March 19
PITTSBURGH -- Sidney Crosby had a natural hat trick to regain sole possession of the NHL goals lead at 40, and Marc-Andre Fleury made 21 saves Sunday as the Pittsburgh Penguins defeated the Florida Panthers 4-0 at PPG Paints Arena.

NHL // 3 years ago
NHL roundup: recap, scores, notes for every game played on March 9
TAMPA, Fla. -- The Tampa Bay Lightning, scrapping for every point in a wild-card logjam, picked up two points Thursday night with one of their more impressive wins, surprising the Minnesota Wild in a 4-1 victory at Amalie Arena.

NHL // 3 years ago
NHL roundup: recap, scores, notes for every game played on February 20
ST. LOUIS -- Vincent Trocheck scored with 4.6 seconds left in the third period to give the Florida Panthers a 2-1 win over the St. Louis Blues on Monday night.

NHL // 4 years ago
Minnesota Wild top Arizona Coyotes, stretch winning streak to seven
ST. PAUL, Minn. -- When a team is on a roll, it takes contributions from up and down the roster to maintain a streak.

Michael Ahmed Stone (born February 13, 1978 in Southfield, Michigan) is an American football safety who is currently a free agent. He most recently was a member of the New York Giants in the National Football League. He was originally drafted by the Arizona Cardinals in the second round (54th overall) of the 2001 NFL Draft. He played college football at Memphis.

Stone attended Southfield-Lathrup High School in Southfield, Michigan, where he lettered in football and track.

FULL ARTICLE AT WIKIPEDIA.ORG
This article is licensed under the GNU Free Documentation License.
It uses material from the Wikipedia article "Michael Stone."
Back to Article
/