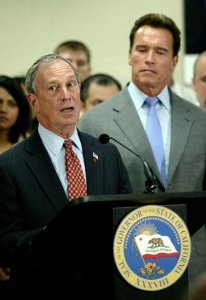 Arts and culture is our city's signature industry, and it also nourishes many others

Every one of us in this group this morning believes there are opportunities to turn things around for our country, our future, our children, the world

The city strongly supports sustainable family farming through our Greenmarket program, which has nearly doubled its locations over the past five years, and it's an honor to be hosting Willie Nelson, John Mellencamp and Farm Aid for their 2007 concert

Since 2002, he has been the Mayor of New York City and, with a net worth of $18.1 billion in 2011, he is also the 13th-richest person in the United States. He is the founder and eighty-eight percent owner of Bloomberg L.P., a financial news and information services media company.

A lifelong Democrat before seeking elective office, Bloomberg switched his registration in 2001 and ran for mayor as a Republican, winning the election that year and a second term in 2005. Bloomberg left the Republican Party over policy and philosophical disagreements with national party leadership in 2007 and ran for his third term in 2009 as an independent candidate. He was frequently mentioned as a possible independent candidate for the 2008 presidential election, which fueled further speculation when he left the Republican Party. There was also speculation that he would run as a vice-presidential candidate. Bloomberg did not, however, seek the presidency nor was he selected as a running mate by any of the presidential candidates.

FULL ARTICLE AT WIKIPEDIA.ORG
This article is licensed under the GNU Free Documentation License.
It uses material from the Wikipedia article "Michael R. Bloomberg."
Back to Article
/