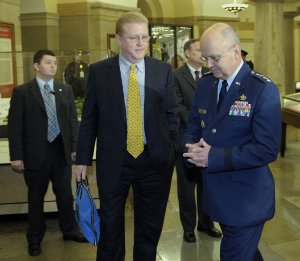 U.S. News // 5 years ago
Donald Trump faces backlash for remark he could read intel briefers' 'body language'
Donald Trump faced criticism for comments at a candidate forum he was able to read the body language of intelligence officers briefing him on security threats.

Opinion // 5 years ago
Will voters' fear of terrorism propel Trump to the White House?
The Islamic State's bombing of an airport terminal and subway station in Brussels, Belgium, on March 22 horrified the world. But Donald Trump saw a silver lining in the latest terrorist atrocity.

What we have described for our enemies in the midst of a war are the outer limits that any American would ever go to in terms of interrogating an al-Qaida terrorist. That's very valuable information

America and its friends have taken the fight to the enemy

The truth is, we simply don't know what would happen if bin Laden is killed or captured, but I'm willing to bet that it would work in our favor

Michael Vincent Hayden, (born March 17, 1945 in Pittsburgh, Pennsylvania) is a retired United States Air Force four-star general and former Director of the National Security Agency and Director of the Central Intelligence Agency. From April 21, 2005–May 26, 2006 he was the Principal Deputy Director of National Intelligence, a position which once made him "the highest-ranking military intelligence officer in the armed forces."

He was director of the National Security Agency (NSA) from 1999–2005. During his tenure as director, the longest in the history of the agency, he oversaw the controversial NSA surveillance of technological communications between persons in the United States and alleged foreign terrorist groups, which resulted in the NSA warrantless surveillance controversy.

On May 8, 2006, Hayden was nominated for the position of CIA Director and reappointment to the rank of general following the May 5 resignation of Porter J. Goss, and on May 23 the Senate Intelligence Committee voted 12-3 to send the nomination to the Senate floor. His nomination was confirmed by the United States Senate on May 26 by a vote of 78-15. On May 30, 2006 and again the following day at the CIA lobby with President George W. Bush in attendance, Hayden was sworn in as the Director of the Central Intelligence Agency.

FULL ARTICLE AT WIKIPEDIA.ORG
This article is licensed under the GNU Free Documentation License.
It uses material from the Wikipedia article "Michael Hayden."