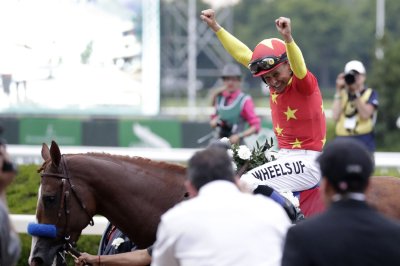 We also found that when the fly makes planning movements prior to take-off, it takes into account its body position at the time it first sees the threat

I had to stop on him a little and he jumped up and overreacted. When I was able to straighten him out and get him outside, he just too off

He had never won a stake and he's 6 years old

Researchers have recorded the neural-cell activity of fruit flies before, but only in restrained preparations --animals that had been stuck or glued down

Michael Dickinson (born 1950) is an English artist known for his work in Turkey, who works with political and satirical collages. In 2008, he was prosecuted for a collage of the Turkish prime minister, but acquitted. He is a member of the Stuckist art movement.

Michael Dickinson was born in Durham, England, and spent most of his early years in Kuwait, where his father was an employee of the Kuwait Oil Company and where he attended the Anglo-American School. He later attended Fyling Hall school in Yorkshire. He lives and works as an English teacher in Istanbul. He is the founder of the Istanbul branch of the Stuckist art movement, and also a writer, playwright and actor.

In May 2005, Dickinson's web site, "The Carnival of Chaos", was blanked and he was informed by the host Tripod (a member of the Lycos group), "You are no longer an authorized member of Tripod. You have been removed because your web site violated our Terms of Service." This occurred after he had posted a collage, Tyrant's Pants, showing President Bush in his underpants with a cruise missile coming out of his rear and a swastika on his right buttock.

FULL ARTICLE AT WIKIPEDIA.ORG
This article is licensed under the GNU Free Documentation License.
It uses material from the Wikipedia article "Michael Dickinson."
Back to Article
/