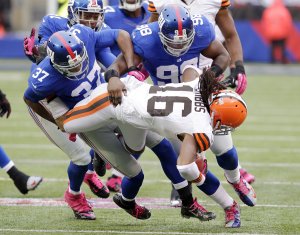 NFL // 3 years ago
Best of the rest: Which undrafted players could you see in the NFL in 2017?
With all 253 picks in the books, the 2017 NFL Draft is complete. But there are still several quality players available, who will be signed quickly by teams. Below are the top 10 undrafted free agents:

NFL // 3 years ago
NFL Mock Draft 2017, Cincinnati Bengals: Top needs, predictions for every round
The Cincinnati Bengals have 11 picks in the NFL Draft, including No. 9 in the first round April 27 in Philadelphia.
Science News // 6 years ago
Forest fires and warming planet could accelerate deforestation in Amazon
The increasingly deadly combination of forest fire and extreme weather spells tragedy for the trees of the Amazonian rainforest.
Sports News // 1 decade ago
Colts cornerback Coe out for season
Indianapolis Colts cornerback Michael Coe, who had surgery on his left knee last week, will miss the 2008 season, the team announced Tuesday.
Business News // 1 decade ago
AT&T discounts DSL to meet merger demands
Telecommunications giant AT&T, to meet U.S. regulators' demands in its merger with BellSouth, has begun offering high-speed Internet service for $10 a month.
Business News // 1 decade ago
AT&T gives Net phone service a push
AT&T Inc. is test-marketing its Internet phone service in two U.S. markets as a possible prelude to a broader rollout, the company says.
Business News // 1 decade ago
SBC to provide wi-fi in hotels, airports
SBC announced Wednesday it will provide Wi-Fi at 6,000 public locations including hotels, airports and restaurants.
Science News // 1 decade ago
Earliest New World writing evidence found
After braving scorching 100-degree heat and choking smoke on the coastal flood plains in Mexico, a team of archaeologists said Thursday they have unearthed the earliest evidence of writing in the New World.

We felt like the merger should go through without any conditions

We want to get a sense for how this sells

We are bullish on Wi-Fi, we see it as a great complement to our other services like DSL and as an opportunity to gain and retain customers

This is a tantalizing piece of evidence that does need, however, more data to really be sure about it

Michael D. Coe (born 1929) is an American archaeologist, anthropologist, epigrapher and author. Primarily known for his research in the field of pre-Columbian Mesoamerican studies (and in particular, for his work on the Maya civilization, where he is regarded as one of the foremost Mayanist scholars of the latter 20th century), Coe has also made extensive investigations across a variety of other archaeological sites in North and South America. He has also specialised in comparative studies of ancient tropical forest civilizations, such as those of Central America and Southeast Asia. He currently (as of 2005) holds the chair of Charles J. MacCurdy Professor of Anthropology, Emeritus, Yale University, and is Curator Emeritus of the Anthropology collection in the Peabody Museum of Natural History, where he had been Curator from 1968 to 1994.

With over four decades of active research experience, Coe is a prolific author of scientific papers across a broad range of archaeological, anthropological and ethnohistorical topics. He has also authored a number of popular works for the non-specialist audience, several of which have been best-selling and much reprinted, such as The Maya (1966) and Breaking the Maya Code (1992). He also co-authored the book Mexico: From the Olmecs to the Aztecs (1962) with Rex Koontz.

Coe received his Ph.D. in anthropology from Harvard University in the early 1950s. Shortly after commencing his graduate studies program there, in 1955 he married the daughter of the noted evolutionary biologist and Russian émigré Theodosius Dobzhansky, Sophie, who was then an undergraduate anthropology student at Radcliffe College.

FULL ARTICLE AT WIKIPEDIA.ORG
This article is licensed under the GNU Free Documentation License.
It uses material from the Wikipedia article "Michael Coe."
Back to Article
/