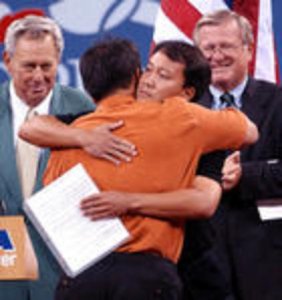 I know that whenever I walk off the court, whether I've won or lost, it's been enjoyable for me

It was a fun match to play, you love to play in a packed house

Michael Te-Pei Chang (Chinese: 張德培; Pinyin: Zhāng Dépéi; born February 22, 1972, in Hoboken, New Jersey, United States) is an American former professional tennis player. He is best remembered for becoming the youngest-ever male winner of a Grand Slam singles title when he won the French Open in 1989 at the age of 17.

Utilizing tremendous speed and strong determination, Chang was one of the best counterpunchers of all time and remained in the Top 10 in the ATP world rankings for several years in the 1990s, peaking at World No. 2. He is a Chinese American, and was popular in Asia. At that time, there were no other Asian-heritage players among tennis' higher ranks.

FULL ARTICLE AT WIKIPEDIA.ORG
This article is licensed under the GNU Free Documentation License.
It uses material from the Wikipedia article "Michael Chang."
Back to Article
/