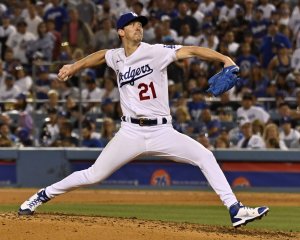 MLB // 2 months ago
Astros beat Braves in World Series Game 5 to avoid elimination, return to Houston
The Houston Astros staved off elimination with a 9-5 win over the Atlanta Braves in Game 5 of the World Series on Sunday night at Truist Park in Atlanta.

MLB // 2 months ago
Astros storm to Game 2 win over Braves, tie World Series at 1-1
The Houston Astros bounced back from their Game 1 loss with a dominant 7-2 win over the Atlanta Braves in the second game of the World Series on Wednesday night at Minute Maid Park in Houston.

MLB // 6 months ago
Astros' Jose Altuve swats walk-off homer vs. Yankees
Jose Altuve jumped on a 1-1 curveball and sent it over the left field fence for a 368-foot, three-run walk-off homer to lead the Houston Astros to a dramatic victory and prevent a series sweep by the New York Yankees.

Michael Charles Brantley, Jr. (born May 15, 1987 in Bellevue, Washington) is a Major League Baseball outfielder who plays for the Cleveland Indians. He is the son of former MLB player and coach Mickey Brantley.

Grew up in Port St. Lucie, Florida and attended school at Ft. Pierce Central High School as a star athlete.

He was drafted by Milwaukee in the seventh round of the 2005 amateur entry draft. In 2005 he played for their Rookie league Helena Brewers and Arizona Brewers. He was promoted to the Class A West Virginia Power in 2006. In 2007, Brantley split his time between West Virginia and the Double-A Huntsville. In 2008, he was involved in a trade that sent him and Matt LaPorta to the Cleveland Indians for C.C. Sabathia. Near the end of the 2009 season, he was called up to the Indians to replace the injured Grady Sizemore in center field. In his time there, he hit .313 with 11 RBIs. On July 4, 2010, he was called up to the majors again to fill in for the injured Shin-Soo Choo. Thus far in 2011, Brantley is having his best year, serving in left field and center field, and helping the Indians to a surprising start.

FULL ARTICLE AT WIKIPEDIA.ORG
This article is licensed under the GNU Free Documentation License.
It uses material from the Wikipedia article "Michael Brantley."