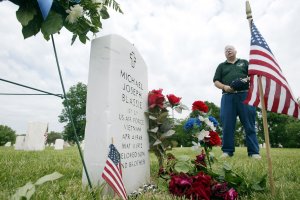 First Lieutenant Michael Joseph Blassie (April 4, 1948—May 11, 1972) was an officer in the United States Air Force. Prior to identification of his remains, Blassie was the Unknown service member from the Vietnam War laid to rest at the Tomb of the Unknowns.

He was the first cousin of professional wrestling star Fred Blassie.

FULL ARTICLE AT WIKIPEDIA.ORG
This article is licensed under the GNU Free Documentation License.
It uses material from the Wikipedia article "Michael Blassie."
Back to Article
/