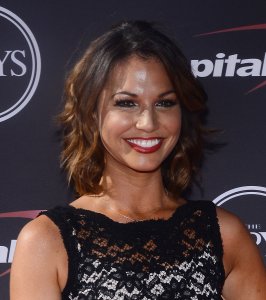 That's patently untrue. It was (Jason's) choice in New Zealand who he proposed to

All I've got is the belly. I like it. I was nervous about what my body was going to do, but I try to eat healthy and maintain somewhat of a workout schedule so that the weight I put on is a healthy weight. So far, it seems to be working for me

We know the sex of our baby. We can now narrow down the names to just one gender

Of the gifts in my lap, I think I am going to take home the pink

Melissa Katherine Rycroft-Strickland (born March 11, 1983), from Dallas, Texas, is a reality television contestant and former Dallas Cowboys cheerleader. She was a drill team officer at Newman Smith High School in Carrollton, Texas where she graduated in 2001. She participated as a contestant on the thirteenth season of ABC's The Bachelor, and CMT reality TV series Dallas Cowboys Cheerleaders: Making the Team. She was a contestant on the eighth season of ABC's Dancing with the Stars. Rycroft was named to People magazine's list of World's Most Beautiful People 2009 and was also named as #99 on Maxim's list of "Hot 100 of 2009".

Rycroft appeared on the 13th season of The Bachelor as one of the 25 bachelorettes vying for the heart of The Bachelor, Jason Mesnick. In the season finale, Mesnick chose Rycroft over runner-up, Molly Malaney, and proposed to her. Rycroft said yes. But following the episode, ABC aired the After the Final Rose (Part One) episode, which was taped six weeks after the season finale episode, and it was then that Mesnick revealed that he was breaking up with Rycroft, stating that he was still in love with Molly Malaney.

FULL ARTICLE AT WIKIPEDIA.ORG
This article is licensed under the GNU Free Documentation License.
It uses material from the Wikipedia article "Melissa Rycroft."
Back to Article
/