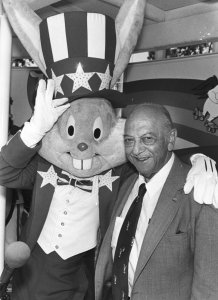 Movies // 3 years ago
Tim Allen on 'Toy Story' glory: 'I'm proud to be part of it'
Tim Allen said he is looking forward to reprising his vocal role of the animated space ranger Buzz Lightyear in a fourth "Toy Story" movie.

Top News // 3 years ago
The Almanac
On July 10, 1925, the so-called Monkey Trial, in which John Scopes was accused of teaching evolution in school, a violation of state law, began in Dayton, Tenn.

They were the result of a simultaneous evolution of comedy

Mel Blanc (May 30, 1908 – July 10, 1989) was an American voice actor and comedian. Although he began his nearly six-decade-long career performing in radio commercials, Blanc is best remembered for his work with Warner Bros. during the "Golden Age of American animation" (and later for Hanna-Barbera television productions) as the voice of such well-known characters as Bugs Bunny, Daffy Duck, Porky Pig, Sylvester the Cat, Tweety Bird, Foghorn Leghorn, Yosemite Sam, Wile E. Coyote, Woody Woodpecker, Barney Rubble, Mr. Spacely, Speed Buggy, Captain Caveman, Heathcliff, Speedy Gonzales, Elmer Fudd and hundreds of others. Having earned the nickname “The Man of a Thousand Voices,” Blanc is regarded as one of the most influential people in the voice-acting industry.

At the time of his death, it was estimated that 20 million people heard his voice every day.

Blanc was born Melvin Jerome Blank in San Francisco, California, to Frederick and Eva Blank. He grew up in Portland, Oregon, attending Lincoln High School. He claimed that when he was 16, he changed the spelling from "Blank" to "Blanc" because a teacher told him that he would amount to nothing and be, like his name, a "blank". Blanc joined The Order of DeMolay as a young man, and was eventually inducted into its Hall of Fame.

FULL ARTICLE AT WIKIPEDIA.ORG
This article is licensed under the GNU Free Documentation License.
It uses material from the Wikipedia article "Mel Blanc."
Back to Article
/