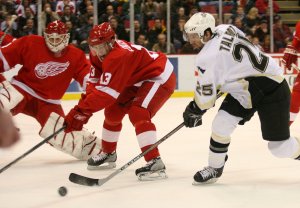 Maxime Talbot (born February 11, 1984) is a Canadian professional ice hockey centre who currently plays for the Pittsburgh Penguins of the National Hockey League (NHL). Drafted out of the Quebec Major Junior Hockey League (QMJHL), Talbot led the Hull/Gatineau Olympiques to back-to-back President's Cups while earning the Guy Lafleur Trophy as playoff MVP both years. He won the Stanley Cup in his fourth season with the Penguins in 2009.

Talbot was selected by the Rouyn-Noranda Huskies in the first round of the 2000 QMJHL Draft. At the trading deadline that year, Talbot was dealt to the Hull Olympiques for current Washington Capitals minor league player Alexandre Giroux. He completed his major junior rookie season with a combined 37 points between the two teams. Before the start of the 2002–03 season started, he was named team captain for the Olympiques and finished the year with a major junior career-high 46 goals and 104 points in 69 games, good for fifth in league scoring and QMJHL Second All-Star Team honors. In the playoffs that year, Talbot led the league in scoring with 44 points in 20 games as he captained the Olympiques to a QMJHL Championship, earning the Guy Lafleur Trophy as playoff MVP. Playing the Kitchener Rangers in the final of the subsequent 2003 Memorial Cup, they were defeated by a 6–3 score.

In the 2003–04 season, Talbot finished third in scoring in the QMJHL with 98 points (25 goals, 73 assists) in 51 games as the team became the Gatineau Olympiques through almagamation. He led the team to a second consecutive QMJHL championship, while being named playoff MVP and leading the league in post-season scoring once more. He was the first to earn back-to-back Guy Lafleur Trophies since Marc Saumier in 1987 and 1988. The Olympiques were, however, defeated for the second straight year in the Memorial Cup final, losing to the Kelowna Rockets 2–1.

FULL ARTICLE AT WIKIPEDIA.ORG
This article is licensed under the GNU Free Documentation License.
It uses material from the Wikipedia article "Maxime Talbot."
Back to Article
/