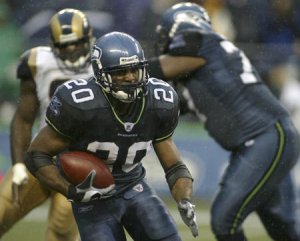 Maurice Autora Morris (born December 1, 1979 in Chester, South Carolina) is an American football running back for the Detroit Lions of the National Football League. He was drafted by the Seattle Seahawks in the second round of the 2002 NFL Draft. He played college football at Oregon.

Morris began his college career at Fresno City College in 1998. He then went to the University of Oregon, where he became the starting running back and helped the team to a 2002 Fiesta Bowl victory. In the Fiesta Bowl, he ran for a highlight-reel 49-yard touchdown, during which he landed on top of a defender and got up without touching the ground.

FULL ARTICLE AT WIKIPEDIA.ORG
This article is licensed under the GNU Free Documentation License.
It uses material from the Wikipedia article "Maurice Morris."
Back to Article
/