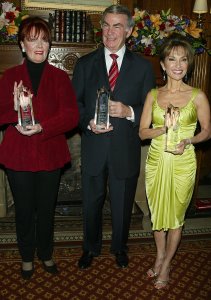 Maureen Therese McGovern (born July 27, 1949) is an American singer and Broadway actress, well-known for her premier renditions of the Oscar winning songs "The Morning After" from the 1972 film The Poseidon Adventure, and "We May Never Love Like This Again" from The Towering Inferno in 1974.

McGovern was born in Youngstown, Ohio, the daughter of James Terrence McGovern and Mary Rita (née Welsh). She has Irish ancestry. As a child, McGovern would listen to her father's singing quartet rehearse in their home. She was told by her elders that she began singing at the tender age of three, and would sometimes sing herself to sleep with things she heard on the radio. She decided at age eight that she wanted to be a professional singer. Her influences include Barbra Streisand and Dionne Warwick.

After graduating from Boardman High School in 1967, she worked as a secretary and performed part-time as a singer for a local folk band called Sweet Rain. Her singing caught the attention of Russ Regan (then head of 20th Century Records) in 1972 when he heard a demonstration she had recorded. At the time, Regan was searching for a singer to record "The Morning After" (the theme from The Poseidon Adventure) for release as a record. He hired McGovern sight unseen to record the song, which resulted in her contracting with 20th Century Records. After it won an Oscar for Best Original Song, "The Morning After" scored well on the popular music charts, reaching #1 during 1973. It sold over one million copies, and was awarded a gold disc by the R.I.A.A. in August 1973.

FULL ARTICLE AT WIKIPEDIA.ORG
This article is licensed under the GNU Free Documentation License.
It uses material from the Wikipedia article "Maureen McGovern."
Back to Article
/