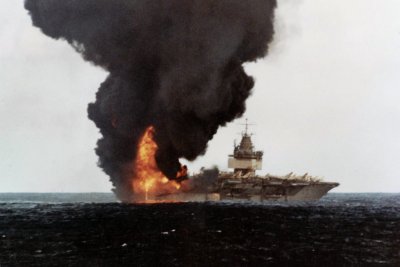 Top News // 5 months ago
The Almanac
On Jan. 14, 1969, a series of explosions aboard the nuclear aircraft carrier USS Enterprise off Hawaii killed 27 men.

Top News // 4 years ago
The Almanac
On Jan. 14, 1963, George Wallace was inaugurated as the governor of Alabama, promising his followers, "Segregation now, segregation tomorrow, segregation forever!"

If we're really in a national emergency, couldn't the president call America's software geniuses and tell them to wire up the FBI this week

Maureen Bridgid Dowd (born January 14, 1952) is a Washington D.C.-based columnist for The New York Times and best-selling author. During the 1970s and the early 1980s, she worked for Time magazine and the Washington Star, where she covered news as well as sports and wrote feature articles. Dowd joined the Times in 1983 as a metropolitan reporter and eventually became an Op-Ed writer for the newspaper in 1995. In 1999, she was awarded a Pulitzer Prize for her series of columns on the Monica Lewinsky scandal in the Clinton administration.

Dowd was born the youngest of five children in Washington, D.C. Her father, Mike, worked as a D.C. police inspector while her mother, Peggy, was a homemaker. In 1973, Dowd received a B.A. in English from Catholic University in Washington, D.C.

Dowd began her career in 1974 as an editorial assistant for the Washington Star, where she later became a sports columnist, metropolitan reporter, and feature writer. When the newspaper closed in 1981, she went to work at Time. In 1983, she joined The New York Times, initially as a metropolitan reporter. She began serving as correspondent in The Times Washington bureau in 1986.

FULL ARTICLE AT WIKIPEDIA.ORG
This article is licensed under the GNU Free Documentation License.
It uses material from the Wikipedia article "Maureen Dowd."
Back to Article
/