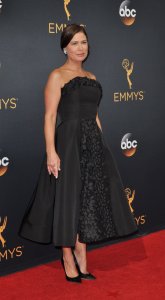 TV // 7 months ago
Jeff Daniels is 'ticked off' in 'American Rust' teaser
Showtime released a teaser for its upcoming series "American Rust" on Wednesday. Jeff Daniels stars in the adaptation of Philipp Meyer's novel, premiering Sept. 12.

TV // 2 years ago
'The Affair' final season to debut in August
Showtime has announced that the fifth and final season of "The Affair" will premiere on Aug. 25.

In an effort to guard my privacy, it seems that the wording of NBC's press release has unfortunately caused some confusion and undue alarm about my health

Maura Therese Tierney (born February 3, 1965) is an American film and television actress, who is best known for her roles as Lisa Miller on NewsRadio and Abby Lockhart on the television medical drama ER.

Tierney, the eldest of three children, was born and raised in the Hyde Park neighborhood of Boston, Massachusetts. Her mother, Pat, is a real estate broker and her late father, Joseph, was a prominent Boston politician who served on the Boston City Council for 15 years. Tierney is of Irish descent.

She attended Notre Dame Academy in Hingham, Massachusetts, where her studies included drama and led to her appearance at the Boston Globe Drama Festival. After graduation, she attended New York University and majored in dance, but changed her major to drama.

FULL ARTICLE AT WIKIPEDIA.ORG
This article is licensed under the GNU Free Documentation License.
It uses material from the Wikipedia article "Maura Tierney."