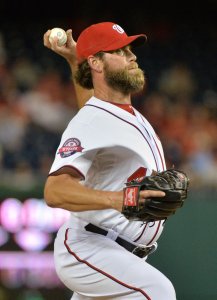 Sports News // 6 years ago
Yasiel Puig gives Los Angeles Dodgers marathon win over San Diego Padres
There is a theory of baseball that argues the longer a game goes, the wider the margin between the reward of winning and the cost of losing.

Sports News // 6 years ago
Washington Nationals' Max Scherzer flirts with no-hitter in win
WASHINGTON -- On June 20 right-hander Max Scherzer came within one out of a perfect game, settling for a no-hitter against the visiting Pittsburgh Pirates.

Sports News // 6 years ago
Stephen Strasburg returns from DL, overpowers Colorado Rockies
WASHINGTON -- Stephen Strasburg entered Saturday's game with an ERA of 5.16 this season and a pedestrian record of 5-5.

Sports News // 6 years ago
Clint Robinson rebounds from strikeout with homer in Washington Nationals' 8-3 win
WASHINGTON -- Clint Robinson wasn't too happy when he struck out looking with the bases loaded in the third inning and voiced his displeasure with home-plate umpire Tripp Gibson.

Matthew J. Thornton (born September 15, 1976, in Three Rivers, Michigan), is a left-handed Major League Baseball relief pitcher for the Chicago White Sox. Before the 2006 season, Thornton was with the Seattle Mariners.

Thornton played briefly (only pitched 1 inning) with the Single A Everett AquaSox in the Northwest League. In 1999 and 2000, Thornton was a starting pitcher with the Wisconsin Timber Rattlers in the Midwest League and showed improvement with his ball control and accuracy, striking out nearly 1 batter an inning. 2001 was probably Thornton's breakout year. Thornton started for San Bernardino Stampede in the California League (high-A ball) and had a 14–7 record, along with a stellar 2.52 ERA and 192 strikeouts in only 157 innings pitched.

FULL ARTICLE AT WIKIPEDIA.ORG
This article is licensed under the GNU Free Documentation License.
It uses material from the Wikipedia article "Matt Thornton."