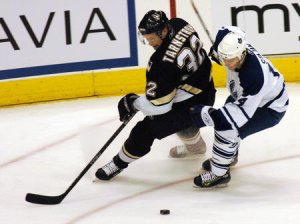 NHL // 5 years ago
Mikael Backlund fuels Calgary Flames to OT win over New Jersey Devils
NEWARK, N.J. -- While the Calgary Flames found a way to rally for an important 4-3 overtime victory on the road Friday night, the New Jersey Devils continued their recent misery on home ice losing for the seventh consecutive time at the Prudential Center.

NHL // 5 years ago
NHL roundup: recap, scores, notes for every game played on February 3
PITTSBURGH -- A goal at 3:15 of overtime by Phil Kessel gave the Pittsburgh Penguins a 4-3 win against the Columbus Blue Jackets at PPG Paints Arena on Friday.

He was drafted 79th overall by the Belleville Bulls in the 2000 Ontario Hockey League (OHL) priority selection. After scoring 33 goals and 52 assists with the Bulls, he was selected by the Toronto Maple Leafs in the second round of the 2002 NHL Entry Draft with the 57th overall selection. Stajan played one game in Toronto at the end of the junior campaign, in which he scored his first NHL goal on his first shot against the Ottawa Senators' goalie Martin Prusek.

FULL ARTICLE AT WIKIPEDIA.ORG
This article is licensed under the GNU Free Documentation License.
It uses material from the Wikipedia article "Matt Stajan."