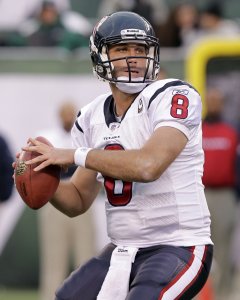 NFL // 1 year ago
Dolphins' Josh Rosen, Preston Williams impress in preseason vs. Falcons
Josh Rosen didn't start against the Atlanta Falcons, but he was the most-productive quarterback in the Miami Dolphins' preseason win Thursday at Hard Rock Stadium.

NFL // 3 years ago
Detroit Lions, Atlanta Falcons match up in a battle of undefeated teams
The Atlanta Falcons appeared to make major strides from the season-opener to their second game against the Green Bay Packers.

Matthew Rutledge Schaub (born June 25, 1981 in Pittsburgh, Pennsylvania) is the starting quarterback for the Houston Texans. He was drafted by the Atlanta Falcons in the third round of the 2004 NFL Draft. He played college football at Virginia.

Schaub attended West Chester East High School in West Chester, Pennsylvania, and was a letterman in football, basketball, and baseball. In football, he finished his career with 3,990 passing yards and 35 touchdowns. As a senior, he was a team captain, named the team's Most Valuable Offensive Back, garnered first team All-Chesmont League honors, first team All-Area honors, first team all-County honors, and USA Today Honorable Mention All-State honors. In baseball, he was named the Chesmont League Sophomore of the Year, and won second team All-Area honors as a junior.

Schaub enrolled at Virginia in the fall of 1999 and redshirted his true freshman season. In 2000, starter Dan Ellis missed some time due to injury, but fellow redshirt freshman Bryson Spinner received the bulk of playing time in relief. After the 2000 season, coach George Welsh retired and was replaced by Al Groh. Schaub was the starter for the first game of the 2001 season at Wisconsin. Over the 2001 season, Schaub and Spinner split quarterbacking duties nearly evenly. The two alternated in some games, while in others either Schaub or Spinner received nearly all the snaps. The two quarterback system worked relatively well with both effectively passing the ball to receiver Billy McMullen, the team's leading offensive threat.

FULL ARTICLE AT WIKIPEDIA.ORG
This article is licensed under the GNU Free Documentation License.
It uses material from the Wikipedia article "Matt Schaub."
Back to Article
/