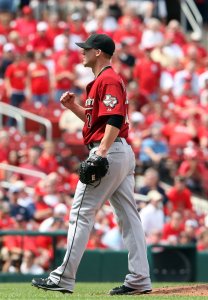 Lindstrom was selected by the New York Mets in the 10th round of the 2002 Major League Baseball Draft. He made his professional debut at Rookie League Kingsport and posted an 0-6 record with a 4.84 ERA in twelve games with eleven games as a starting pitcher. He began next year at Single-A Capital City and was dominant, as his 2.86 ERA and 7.94 K/9 rate showed. This earned him a promotion to Brooklyn where Lindstrom would finish out the 2003 season well, as he compiled a 7-3 record with a 3.44 ERA.

FULL ARTICLE AT WIKIPEDIA.ORG
This article is licensed under the GNU Free Documentation License.
It uses material from the Wikipedia article "Matt Lindstrom."
Back to Article
/