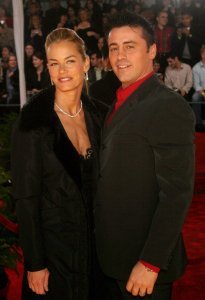 TV // 1 week ago
'Friends' to remain on Nick at Nite under new deal
Nickelodeon renewed its deal with Warner Bros. Television to keep "Friends" in its Nick at Nite programming block.

TV // 4 months ago
David Schwimmer gives opinion on Ross and Rachel debate: 'They were on a break'
David Schwimmer appeared on "The Tonight Show Starring Jimmy Fallon" and gave his thoughts on his character Ross believing that he was on a break with Jennifer Aniston's Rachel during a memorable episode of "Friends."

TV // 7 months ago
'Friends' reunion special won't be ready for HBO Max debut
HBO Max assured its eagerly awaited "Friends" reunion special is still in the works even though production has been postponed until the coronavirus pandemic is over.

Jeffrey and David have a great idea -- I love it

Matthew Steven "Matt" LeBlanc (born July 25, 1967) is an American actor, best known for his role as Joey Tribbiani on the NBC sitcoms Friends and its spin-off Joey.

In 2011, LeBlanc began starring as a fictional version of himself in Episodes, a BBC2/Showtime television series created by Friends co-creator David Crane and Jeffrey Klarik.

Matt LeBlanc was born in Newton, Massachusetts, the son of Patricia Grossman, an office manager, and Paul LeBlanc, a mechanic.

FULL ARTICLE AT WIKIPEDIA.ORG
This article is licensed under the GNU Free Documentation License.
It uses material from the Wikipedia article "Matt LeBlanc."
Back to Article
/