NFL // 1 year ago
Sam I Am: Perhaps surprisingly, Jets' Darnold shines in debut
Nobody saw this coming.

NFL // 1 year ago
Matt Patricia installs Patriots' 'Do your job' mantra in Detroit
Detroit Lions head coach Matt Patricia is bringing along a familiar phrase from his time with the New England Patriots.

NFL // 1 year ago
Notebook: RG3 agrees to contract with Ravens
Quarterback Robert Griffin III agreed to a one-year deal with the Baltimore Ravens, the team announced on Wednesday.

NFL // 1 year ago
Cassel agrees to deal with Lions
Quarterback Matt Cassel has agreed to a contract with the Detroit Lions, multiple media sources reported on Wednesday.

NFL // 1 year ago
Titans reel in Gabbert as backup to Mariota
Quarterback Blaine Gabbert agreed to terms on a contract with the Tennessee Titans, the team announced.

NFL // 1 year ago
Bridgewater ready to fight for Jets' starting job
Teddy Bridgewater, speaking with the New York media for the first time since signing with the Jets, said he is ready to compete for the starting job despite missing almost two seasons because of a knee injury. 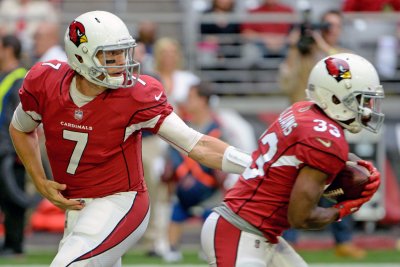 NFL // 1 year ago
Future of Titans RB Murray unclear
INDIANAPOLIS -- As Tennessee Titans general manager Jon Robinson and new head coach Mike Vrabel set about evaluating prospects at the NFL Combine and begin to assess their roster going forward, one of the biggest questions on the agenda is whether running back DeMarco Murray still fits into the team's plans.

Matthew Brennan "Matt" Cassel (born May 17, 1982, Northridge, California) is the starting quarterback for the Kansas City Chiefs of the National Football League. He was drafted by the New England Patriots in the seventh round of the 2005 NFL Draft. He played college football at USC.

He became the Patriots' starting quarterback in Week 2 of the 2008 season after then reigning NFL MVP Tom Brady suffered a season-ending knee injury. According to ESPN research, he is the only known quarterback in NFL history to start an NFL game at quarterback without ever starting at quarterback in college. In February 2009, the Patriots used their franchise tag on Cassel, extending him a one-year contract worth over $14 million, the largest one-year contract for an offensive player in NFL history. Later that offseason, the Patriots made a trade which sent Cassel to the Chiefs, who signed him to a 6 year, $62.7 million contract in July 2009.

Cassel was born in Northridge, Los Angeles, California|Northridge, California. When Cassel was 11 years old, his family home was at the epicenter of the 1994 Northridge earthquake, which at one pointed trapped his father Greg under a marble column and led water from their swimming pool to flood their house. Their home was eventually condemned as a result, forcing the Cassel family to move.

FULL ARTICLE AT WIKIPEDIA.ORG
This article is licensed under the GNU Free Documentation License.
It uses material from the Wikipedia article "Matt Cassel."
Back to Article
/