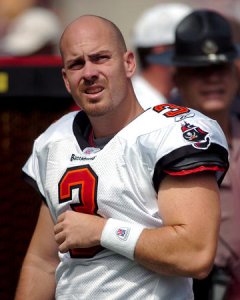 NFL // 1 year ago
Fantasy football: Week 1 kicker and defense rankings
Wil Lutz is the No. 1 rated kicker and the Philadelphia Eagles are the top fantasy football defense/special teams unit for Week 1 of the 2019 NFL season, according to UPI senior sports writer Alex Butler.

Steven Matt Bryant (born May 29, 1975 in Orange, Texas) is an American football placekicker for the Atlanta Falcons of the National Football League. He was signed by the Frankfurt Galaxy as a street free agent in 2002. He played college football at Baylor.

After playing football and baseball at Bridge City High School in Bridge City, Texas, Bryant would go on to attend Trinity Valley Community College in Athens, Texas where he was a two time NJCAA All-American and a member of the 1994 national championship team. He then signed with Oregon State University, later transferring to Baylor University where he ranks seventh in all-time scoring list with 105 points (21 field goals and 42 extra points) also his 21 field goals place him fifth in Bears history and hit 42-42 extra points to set the school record with a 100 percent success rate. After graduating, he went undrafted and worked for several years at a pawn shop, and then as a personal trainer.

FULL ARTICLE AT WIKIPEDIA.ORG
This article is licensed under the GNU Free Documentation License.
It uses material from the Wikipedia article "Matt Bryant."
Back to Article
/