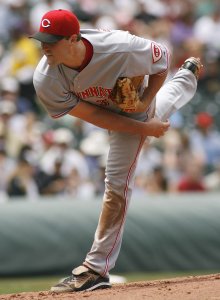 MLB // 4 years ago
Warming Indians play two vs. Blue Jays
CLEVELAND -- After an extremely slow start to the season offensively, Cleveland Indians hitters have warmed with the weather. Cleveland will conclude its longest homestand of the season, 11 games, on Thursday with a doubleheader against the Toronto Blue Jays.

MLB // 4 years ago
Minnesota Twins pick up split with Cleveland Indians behind Max Kepler homer
MINNEAPOLIS -- Max Kepler hit a tiebreaking solo homer in the seventh inning after his slip led to an Indians run in the top of the inning, and the Minnesota Twins beat Cleveland 4-2 to split a day-night doubleheader Thursday at Target Field.

MLB // 4 years ago
Detroit Tigers: Justin Upton walk-off stuns Minnesota Twins
DETROIT -- Justin Upton drilled a walk-off, two-run homer with nobody out in the bottom of the ninth inning Saturday night to give the Detroit Tigers a 12-11 comeback victory over Minnesota that snapped the Twins' six-game winning streak.

He attended McCallum High School and was drafted out of high school by the Atlanta Braves in the 2nd round of the 1998 Major League Baseball Draft.

Belisle began his professional career in 1999, pitching for the Rookie level Danville Braves. He was promoted to the Single-A Macon Braves to begin the 2000 season; in 15 starts, he had a 2.38 ERA and a WHIP under 1. This was good enough to get Belisle a promotion to Single-A Advanced Myrtle Beach where he had a 3.43 ERA in 12 starts. He spent all of 2002 and most of 2003 with the Double-A Greenville Braves before being traded to the Cincinnati reds for veteran relief pitcher Kent Mercker as the PTBNL on August 14, 2003.

FULL ARTICLE AT WIKIPEDIA.ORG
This article is licensed under the GNU Free Documentation License.
It uses material from the Wikipedia article "Matt Belisle."