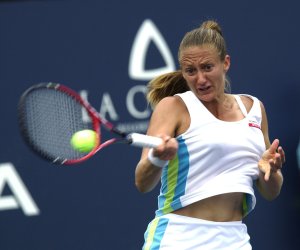 Pierce withdraws from the French Open May 26, 2006

Mary Pierce (born 15 January 1975, in Montreal, Canada) is a tennis professional playing on the Women's Tennis Association (WTA) tour. She is a citizen of France, Canada, and the United States but plays for France in team competitions and the Olympics.

Pierce has won four Grand Slam titles, two in singles and two in doubles. She has reached six Grand Slam singles finals, most recently at the US Open and French Open in 2005. Her Grand Slam singles titles came at the 2000 French Open and the 1995 Australian Open. She won the 2005 Wimbledon mixed doubles championship and has reached three Grand Slam doubles finals. She has won 18 WTA singles titles and 10 WTA doubles titles, including five Tier I singles events. She also has twice reached the final of the season-ending WTA Tour Championships, most recently in 2005.

FULL ARTICLE AT WIKIPEDIA.ORG
This article is licensed under the GNU Free Documentation License.
It uses material from the Wikipedia article "Mary Pierce."
Back to Article
/