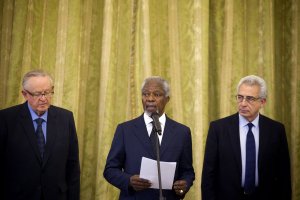 Top News // 3 years ago
The Almanac
On June 23, 1993, John Bobbitt made headlines when his wife, Lorena Bobbitt, cut off his penis while he slept.

Slovenia needs to let the negotiations with Croatia move forward

I have been a bit surprised that the EU has been less proactive than others in the field of international peace mediation, although it is a political machinery of negotiation and mediation

When I look at the U.S. system, they have created the U.S. Institute of Peace endeavors

Ahtisaari was a UN Special Envoy at the Kosovo status process negotiations, aimed at resolving a long-running dispute in Kosovo, which declared its independence from Serbia in 2008. In October 2008, he was awarded the Nobel Peace Prize "for his efforts on several continents and over more than three decades, to resolve international conflicts". The Nobel statement said that Ahtisaari has played a prominent role in resolving many conflicts in Namibia, Indonesia, Kosovo and Iraq, among other areas.

Martti Ahtisaari was born in Viipuri, Finland (now Vyborg, Russia). His father, Oiva Ahtisaari (whose grandfather Julius Marenius Adolfsen had emigrated with his parents to Finland in 1872 from Tistedalen in southern Norway) took Finnish citizenship in 1929 and changed his surname from Adolfsen in 1937. The Continuation War (World War II) took Martti's father to the Eastern Front as an NCO army mechanic, while his mother, Tyyne, moved to Kuopio with her son to escape immediate danger from the war. Kuopio was where Ahtisaari spent most of his childhood, eventually attending the Kuopion Lyseo high school.

FULL ARTICLE AT WIKIPEDIA.ORG
This article is licensed under the GNU Free Documentation License.
It uses material from the Wikipedia article "Martti Ahtisaari."