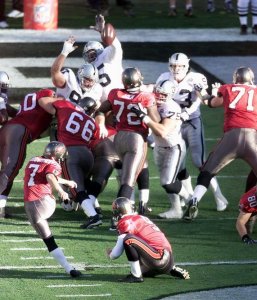 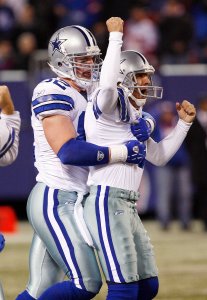 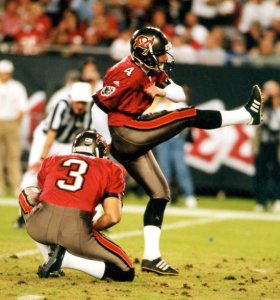 We're not sure if it is tweaked or a cramp

It's amazing to get a win on the road like this. It was special day. It's my dad's birthday

Martín Gramática (born November 27, 1975 in Buenos Aires, Argentina) is an American football placekicker who is currently a free agent in the National Football League. He was drafted by the Tampa Bay Buccaneers in the third round of the 1999 NFL Draft. He played college football at Kansas State.

Gramática has also been a member of the Indianapolis Colts, New England Patriots and Dallas Cowboys. He is the older brother of professional placekickers Bill Gramática and Santiago Gramática.

Gramatica went to LaBelle High School in LaBelle, Florida. but did not play football until senior year after growing up playing soccer in Argentina. He hit 8 out of 10 field goals (longest 52 yds), 22 PATs, and sent 38 of 49 kickoffs out of the end zone for touchbacks.

FULL ARTICLE AT WIKIPEDIA.ORG
This article is licensed under the GNU Free Documentation License.
It uses material from the Wikipedia article "Martin Gramatica."
Back to Article
/