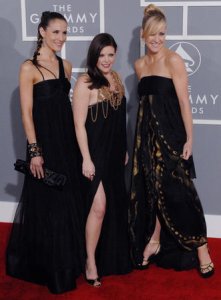 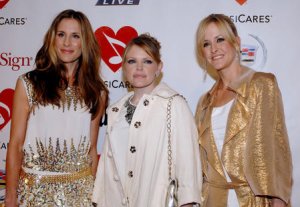 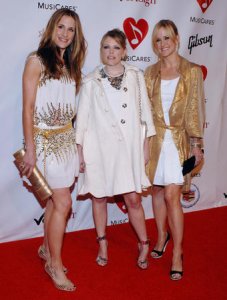 Entertainment News // 8 months ago
The Chicks: Lady A lawsuit 'goes against the point' of name change
The Chicks, formerly known as The Dixie Chicks, weighed in on the band Lady A suing blues singer Anita White.

TV // 8 months ago
The Chicks explain name change: 'It was about time'
The Chicks appeared on "The Late Show with Stephen Colbert" to discuss why they dropped Dixie from their name.

We've gotten a lot of hate mail, a lot of threatening mail

Music videos are instrumental in bringing our music to the fans, and we take making them very seriously

We know that music videos are instrumental in bringing our music to the fans and we take making them very seriously. There aren't any videos we've done that we haven't been completely involved in the creative process

Martie Maguire is a Grammy Award-winning American singer, songwriter, multi-instrumentalist, and a founding member of the female alternative country band, Dixie Chicks. She won awards in national fiddle championships while still a teenager. Maguire is accomplished on several other instruments, including the mandolin, viola, acoustic bass, and guitar. She has written and co-written a number of the band's songs, some of which have become chart-topping hits. She also contributes her skills in vocal harmony and backing vocals, as well as orchestrating string arrangements for the band.

Maguire learned several instruments at a young age, honing her skills with her sister, Emily Robison (neé Emily Erwin), by playing together with two other schoolmates for over five years as a part of a high school touring bluegrass quartet. After graduation, the sisters forged an alliance with two other women they had met through the Dallas music scene, Laura Lynch and Robin Lynn Macy, forming a bluegrass and country music band, busking and touring the bluegrass festival circuits for six years. After the departure of Macy, and the replacement of Lynch with singer-songwriter Natalie Maines, the band widened their musical repertoire and appearance. The result was a trio so commercially successful that it took the country music industry by surprise, with a number of hit songs, albums, and awards that have set records in the music industry. Maguire subsequently stood by her bandmates as they were engulfed in political controversy.

Martha Elenor Erwin (nicknamed "Martie") was born October 12, 1969, in York, Pennsylvania, but was raised in Addison, a northern suburban town on the edge of Dallas, Texas, with an older sister, Julia Erwin-Weiner, two years her senior, and younger sister, Emily, to parents Paul Erwin and Barbara Trask. Encouraged by her parents- both educators at private schools - Maguire began playing classical violin at age five, and by age 12, was learning to play "fiddle style", with a birthday gift of fiddle lessons, and was active in her school orchestra. Emily Erwin, (later known as Emily Robison), three years her junior, also shared an early talent, interest and love of music, and the two were provided musical instruction on several instruments. Because of this, although Maguire became famous for her ability in vocal harmony, and mastery of the fiddle, she also plays a variety of stringed instruments that include the viola, guitar, mandolin, and bass.

FULL ARTICLE AT WIKIPEDIA.ORG
This article is licensed under the GNU Free Documentation License.
It uses material from the Wikipedia article "Martie Maguire."
Back to Article
/