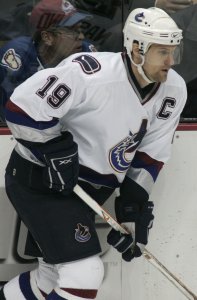 I thought the power play was a big difference tonight

When they scored on the power play, it was a turning point

I don't care about my personal things. I just wanted to get this win so we could get back to .500. We didn't

Markus Näslund (born July 30, 1973) is a retired Swedish professional ice hockey player who last played for the New York Rangers of the National Hockey League (NHL). Prior to signing with the Rangers, Näslund spent twelve years with the Vancouver Canucks, including seven as team captain. He was nicknamed "Nazzy" by Canucks fans and is referred to as "Macke" or "Mackan" in his native Sweden. He announced his retirement from the NHL on May 4, 2009, after 15 seasons.

Originally drafted in the first round by the Pittsburgh Penguins, Näslund is a three-time First Team All-Star, chosen in 2002, 2003 and 2004. In 2003, he won the Lester B. Pearson Award and was a Hart Memorial Trophy nominee. After being traded to Vancouver in 1996, he became the franchise leader in goals and points. In twelve seasons with the Canucks, he was named team MVP five times and led the team in scoring for seven consecutive seasons—both team records.

Internationally, Näslund has represented Sweden on many occasions, winning two bronze medals and a silver at the World Championships, as well as two silvers as a junior at the World Junior Championships, where he holds the record for most goals scored in a single tournament.

FULL ARTICLE AT WIKIPEDIA.ORG
This article is licensed under the GNU Free Documentation License.
It uses material from the Wikipedia article "Markus Naslund."
Back to Article
/