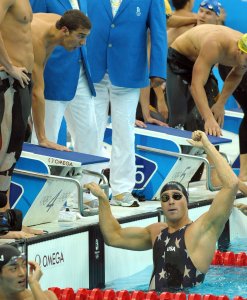 Mark Andrew Spitz (born February 10, 1950) is a retired American swimmer. He won seven gold medals at the 1972 Munich Olympic Games, an achievement surpassed by Michael Phelps who won eight golds at the 2008 Olympics.

Between 1968 and 1972, Spitz won nine Olympic golds plus a silver and a bronze, five Pan American golds, 31 US Amateur Athletic Union titles and eight US National Collegiate Athletic Association titles. During those years, he set 33 world records. He was the most successful athlete at the 1972 Summer Olympics. He was named World Swimmer of the Year in 1969, 1971 and 1972.

Spitz was born to a Jewish family in Modesto, California, the first of three children of Arnold and Lenore Smith Spitz. When he was two years old, Spitz's family moved to Honolulu, Hawaii where he swam at Waikiki Beach every day. "You should have seen that little boy dash into the ocean. He'd run like he was trying to commit suicide." Lenore Spitz told a reporter for Time (April 12, 1968). At age six his family returned to Sacramento, California, and he began to compete at his local swim club. At age nine, he was training at Arden Hills Swim Club in Sacramento with Sherm Chavoor, the swimming coach who mentored him and six other Olympic medal winners. Before he was 10, Spitz held 17 national age-group records, and one world record. At 14, his family moved to Santa Clara so Spitz could train with George F. Haines of the Santa Clara Swim Club. From 1964 to 1968 Mark trained with Haines at SCSC and Santa Clara High School. During his four years there, Mark held national high school records in every stroke and in every distance. It was a remarkable and unprecedented achievement. In 1966, at 16, he won the 100 meter butterfly at the National AAU Championships, the first of his 24 AAU titles. The following year, 1967 Mark set his first world record at a small California meet, in the 400 meter freestyle, with a time of 4:10.60, and emerged on the world swimming stage.

FULL ARTICLE AT WIKIPEDIA.ORG
This article is licensed under the GNU Free Documentation License.
It uses material from the Wikipedia article "Mark Spitz."
Back to Article
/