U.S. News // 1 year ago
2020 race for president: Who's running
The 2020 presidential campaign features a diverse slate of Democrats -- and one Republican -- vying to challenge President Donald Trump. 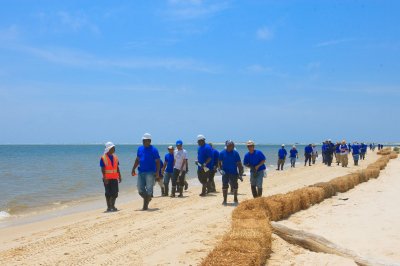 U.S. News // 2 years ago
Trump admin's approval of drilling tests in Atlantic bucks both parties
Republicans and environmental groups are united in an effort to prevent seismic testing in the Atlantic Ocean that could be used for offshore drilling.

U.S. News // 3 years ago
House passes spending bill with $1.6B to begin border wall
The House approved a $788 billion national security bill Thursday that includes $1.6 billion towards a wall along the U.S.-Mexico border.

Given everything that has gone on, it's obviously something he considered, but he's determined to serve out his term

Marshall Clement "Mark" Sanford Jr. (born May 28, 1960) is an American politician from South Carolina, who was the 115th Governor of South Carolina from 2003 to 2011. A member of the Republican Party, he served from 1995 to 2001 as Congressman in the United States House of Representatives for South Carolina's 1st congressional district, where he held conservative positions.

In 2002, he was elected the 115th Governor of South Carolina, defeating Democratic incumbent Jim Hodges, and was reelected in 2006. As governor, he had a contentious relationship with the South Carolina legislature: notably, he made public statements that he would reject stimulus funds for his state from the American Recovery and Reinvestment Act of 2009. Following a subsequent battle in the South Carolina Supreme Court, he was forced to accept the funds.

On June 24, 2009, Sanford resigned as chairman of the Republican Governors Association, after he publicly revealed that he had an affair with María Belén Chapur, an Argentine woman. He was later censured over the affair because of misuse of state travel funds.

FULL ARTICLE AT WIKIPEDIA.ORG
This article is licensed under the GNU Free Documentation License.
It uses material from the Wikipedia article "Mark Sanford."
Back to Article
/