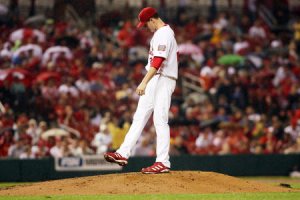 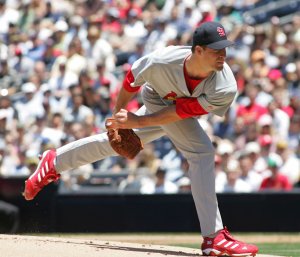 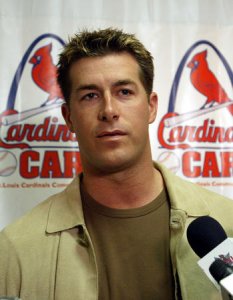 Mark Alan Mulder (born August 5, 1977 in South Holland, Illinois) is a former left-handed starting pitcher in Major League Baseball. After playing for Michigan State University, Mulder was selected by the Oakland Athletics with the second overall pick in the 1998 Major League Baseball Draft.

Mulder was quickly placed on the fast track to the major leagues and made his major-league debut on April 18, 2000; he was still only 22 years old and had less than two seasons of minor-league experience. He had a rocky start to his MLB career, going 9-10 with a 5.44 ERA.

In 2001, Mulder played his first full major-league season and quickly became a dominant pitcher. Leading the American League with 21 wins, he was in contention for a Cy Young Award, anchoring a powerful Oakland rotation along with Barry Zito and Tim Hudson, called the "The Big Three". He continued to do well in 2002, winning 19 games and striking out a career-high 159 batters in 207.1 innings. Limited by injuries in 2003, he would only log 26 starts, he still won 15 games and had a career-best 3.13 earned run average. 2004 was a rough year for Mulder; he had a higher ERA and walked more batters. The A's traded him to the St. Louis Cardinals on December 18, 2004, for pitchers Danny Haren and Kiko Calero, and minor league catcher Daric Barton.

FULL ARTICLE AT WIKIPEDIA.ORG
This article is licensed under the GNU Free Documentation License.
It uses material from the Wikipedia article "Mark Mulder."
Back to Article
/